Cloned book image and other issues

Also, some fields are empty after the cloning. is that normal?

all the empty fields are non cloned data fields 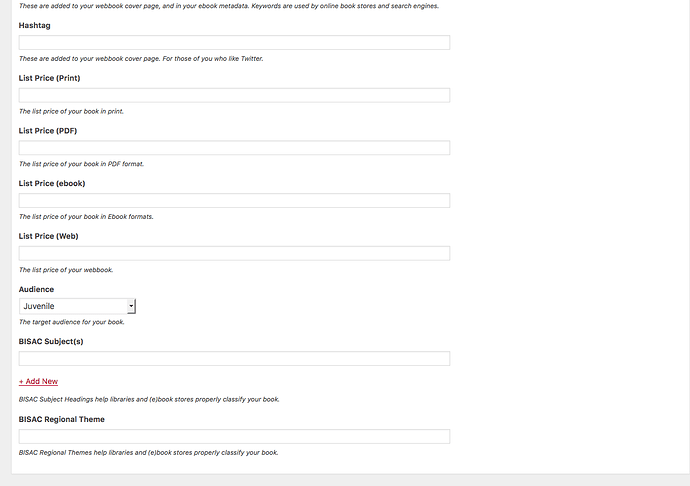 Some of them must be cloned, some of them should not to be… is that sutation evaluated?

Further to Dac’s point—we intend to expand the metadata that’s cloned in a forthcoming release. However, only core metadata that is exposed via the /pressbooks/v2/metadata endpoint is cloned at this time.

hashtag can be discussionUrl maybe

if no prices are created, is not possible to add isAccessibleForFree?

Series number is not position

print isbn and ebook isbn can use both isbn? or the second one identifier

Subjects are not about ?

Why have we some differences between the wp-json and the structured data in the metatags?

Also, did you take a look to the picture, the line of code of the image itemprop. The url of the jpg belong to another book.

We are going to remove the structured data in meta tags soon in favour of JSON-LD.

The picture URL will be addressed in forthcoming improvements to the clone tool.

It’s “normal” because you are using the default book cover image (/plugins/pressbooks/assets/dist/images/default-book-cover.jpg) so the image isn’t copied to the new book. If you had a custom cover, it would be copied as part of the cloning process.

Is not finish, i have some issues and mistakes to deal with, but that´s how looks like the schema and the LRMI educational plugins I´m working with 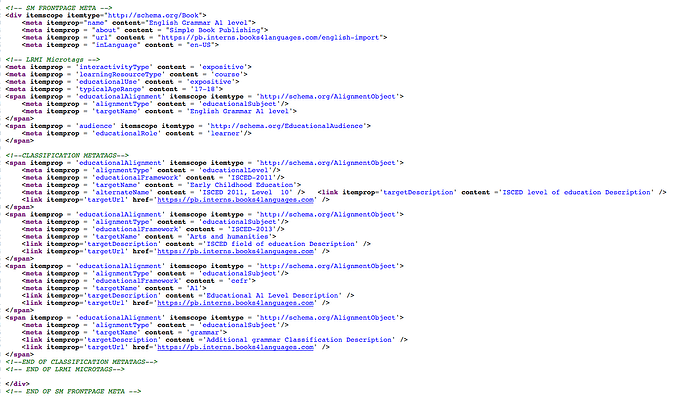