I’m trying to set up a local pressbooks-dev instance using the instructions found here. All is well until I run vagrant up to provision the environment.

The first error I’m getting is:

To side-step this, I tried just removing all mentions of princexml in the server.yml, dev.yml, and requirements.yml, and that worked fine.

The issue that I’m stuck on now is this error:

A cursory Google search makes it kind of look like a Python version issue? I’m not entirely sure. Will continue poking at this, but wanted to drop a line here in case someone’s run into this before and knows offhand how to solve.

Hey @bryan, as it so happens I was just working on the PrinceXML role yesterday. If you restore it to the requirements.yml and use version 11.4.0 it will work as expected.

For the second error it looks like you are using Python 3 on your local machine but the version of Trellis you are working with doesn’t support it: https://discourse.roots.io/t/name-unicode-is-not-defined/14230

This PR (which I’ve finished testing) updates our fork to align with the latest version of Trellis, which includes:

We will be developing against this soon, so if you want to try it out you might be able to skirt both of the issues you ran into.

Still didn’t get this working, but it’s not a crisis. From what I can tell, I’m still running into a python/ansible compatibility issue. I’ll keep tinkering about, and if I can get it working I’ll post here again. 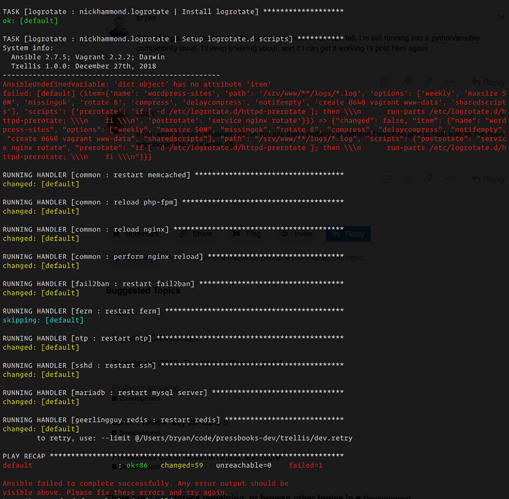 It’s the standard config from the repo (unchanged):

Interesting. If you are running this in the same location as you were before pulling the latest version, can you try deleting the the trellis/vendor directory, then running vagrant halt && vagrant up --provision?

That was totally the issue. I would do:

FYI @dac.chartrand ran into this too, and suggested a change in upstream Trellis which we’ll get shortly that should prevent this issue in future! https://github.com/roots/trellis/pull/1064